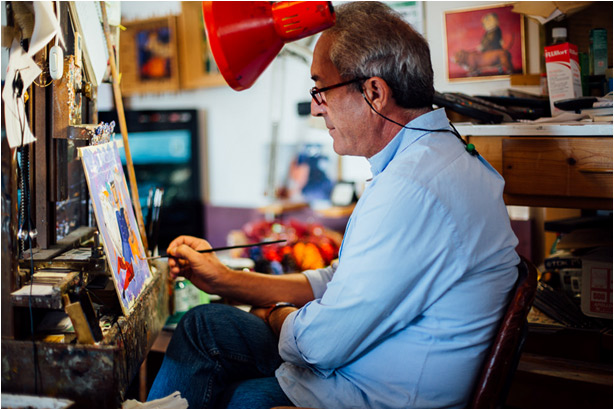 1954- Pino Procopio is born in Guardavalle(CZ) on June 16th, the same year the Italian television was born – but instead of black and white, he was born in full technicolor. His father, who managed a store which sold appliances, tried to sell him as a home decorator item, but his mother energetically vetoed the idea.

1957- As he attends nursery school he is drawn to the clay which surrounds and school building and begins to model neo-primitive sculptures.

1960- He looks upon elementary school with a certain detachment, well-hidden and he spends his school days in the orange groves, attracted by the chromatic colors of the oranges and the shades of green in the leaves , searching for the murmur of life… among the olive trees, the suffering , gnarled trunks. twisted. and along the transparent streams of standing water, interrupted by quick leaps. He graduates from elementary school with great grades, despite his parallel interests.

1971- His first easel. Now, there are two alone: one talks and the other listens and smokes.

1974- Rome. Graduated from high school, he enrolls in university, Department of Architecture, Valle Giulia, by this time boring and full of dust. Bleary-eyed and the freed by the struggle. The lions were no longer there.

1975- During a windy day, as he crosses Piazza del Popolo in Rome, a slip of paper with his address and phone number whips by the obelisk and attracts the attention of a Roman gallery owner. During his stay in the capital, the artist hangs out in many galleries and meets many artists, some pretenders, recognizable by their very strange clothes. During the great Van Gogh exhibition in the Gallery of Modern Art, the artist stands in line for hours, not to see Van Gogh, but to admire the stupendous paintings of Antonio Corpora on exhibit on the floor underneath. He writes two poems, the first dedicated to a ”maestro” of life, the second to the deep sea in Calabria, both of which remain unpublished, sparing the eventual reader.

1980- his first exhibition . Galleria “La Bitta”. He meets the first gallery owner. A gentleman. The show, a great success. Other gentlemen follow.

1981- In an unauthorized foundry in Rome he fuses 4 sculptures in bronze. His real passion.

1983- On a brisk March day, after graduating from university, feeling sensitive and generous, he marries a girl who he met the day before on a passing train. Personal show at “La Riva” Gallery, Giulianova(TE).

Jump ahead 20 years, sparing whoever reads this the list of galleries where he has shown, the competitions participated in and the prizes won. Also because, he has never won anything, never participated any competitions, not having participated in competitions , because afraid of arriving second, or, worse still, arriving third. However, upon pressing insistence , three themed shows are recalled:

2005- the first: “Mail, a Century of Tales” , sponsored by the Ministry of Postal Service and Telecommunications, Rome, tells the story of 100 years of the Italian postal service.

2008- The second show tells the story, very theatrically, of Ulysses, where Alcinous , in the role of impresario, puts at his disposition, the prop man, the set designer and the sound and light engineer. The artists dwells on the Mermaids, declaring with absolute conviction, to have seen two sirens one autumn morning before dawn on a sandbar in Calabria. No more anisette in the coffee since that morning… The exhibit was shown at the Museo Boncompagni Ludovisi in Rome.

2010- At the “Arte Pentagono” Gallery in Pescara, the show “Pinocchio, Jamaal, Mediterranean brother” tells the tale of a Moroccan Pinocchio.

2012- Taking advantage of the naivety of about 50 nursery school children, the artist introduces himself with fatherly overtones, almost clerically, and announces a “fake” design competition themed “Animals in the Savanna”. After collecting the designs the sneaky “saint” runs back to his studio and translates this precious material in grand paintings which are, at the same time, primitive, new, witty, quick and colorful. He has returned to the old primitivism of his childhood.2013- The children are still waiting, with tearful eyes, to know the results of the competition.

Today- In Giulianova you can see him every once in a while at Oreste’s, his barber. No more black curls on the blue cape of “Figaro” but segments in white and grey. Everything seems a sea swept by the wind, “ falling”. Outside the barbershop you can hear him muttering “Oreste, a little respect! Change the color of your capes! Maybe white… or at least grey…” The barber’s scissors are the hands of the