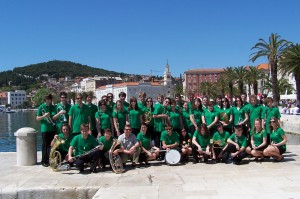 The Wind Orchestra of Art School in Uni?ov has a long tradition, having been formed in 1956. It is a school orchestra, whose members are not only students of the Art School in Uni?ov but also its graduates. Nowadays, the Orchestra has 45. Jaroslav Voloch has been the conductor and art leader since 2001.
Besides regular performances in the local region, the Orchestra also participates in major international competitions and festivals, which is a great motivation for the members of the Orchestra. The Orchestra has played in a number of countries including Slovakia, Switzerland, Poland, Germany and France.
Recent successes include 1st prize at EMJ festival in Neerpelt, Belgium in 2013, 1st prize at the International Youth Music Festival in Bratislava, Slovakia in 2012, 1st prize at Mitteleuropa Blasmusikfestival in Split, Croatia in 2012, 2nd prize at EMJ festival in Neerpelt, Belgium in 2011 and the gold prize at the “Gold Trumpet Kozy” festival in Poland in 2009.
Other achievements have been winning gold prizes three times at the “Young Prague” festivals. At these festivals, the Orchestra also won prizes for “Best Interpretation of the Compulsory Composition” and “Most Interesting Performance of Composition of National Author”. The Orchestra’s conductor also won a special award for “Best Conductor Performance”.